‘Hitler Was A Liberal’ 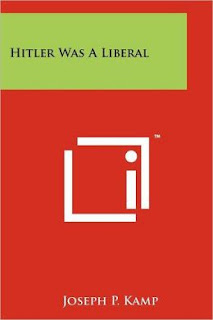 Believe it or not, an American author called Joseph P. Kamp wrote a book called Hitler Was A Liberal, published in 1949 as part of an ultraconservative propaganda campaign organised and financed by the Texan oil billionaire and multiple bigamist H.L. Hunt.

The astonishing story of Hunt’s ultraconservative activities is part of a fascinating blog by TV documentary maker Adam Curtis, which explores the idea that the abuse of language deprives us of much of the freedom and independence we imagine we have.

Curtis credits Hunt with starting the current trend towards corrosion of objectivity and truth in the media. He tells the story of Hunt to illustrate his thesis:


So much of the language that surrounds us – from things like economics, management theory and the algorithms built into computer systems – appears to be objective and neutral. But in fact it is loaded with powerful, and very debatable, political assumptions about how society should work, and what human beings are really like.

Once again, Adam Curtis has produced a rich and thought-provoking essay, illustrated with some extraordinary video footage. Far superior to the trivia that passes for most political comment these days, it reminds us of the serious themes that politics is really about.