This week's Glee Club was a great success, with the biggest attendance ever.  Our supply of the Liberator Songbook sold out in record time.  Onlookers seemed to enjoy it.  Even a journalist from Sky News called it "the best night ever" (and on being challenged she did not say she was being sarcastic).

We have remembered two good friends at Autumn Glee Clubs who have recently departed us.  Simon Titley was on the front cover of the 2014 Glee Club Songbook and Charles Kennedy was remembered on the front page of the 2015 Glee Club Songbook.  Charles was remembered fondly.  We spoke to his family to see what their view was about the many songs about him before printing the songbook.  They said that he would have wanted us to keep on singing about him.  We did sing the song "Song in Praise of Charles Kennedy" although we did not sing any of the other songs.   We did remove the Skye Boat Song from the songbook we did not get a response from the family before the songbook went to press.  The "Song In Praise of Charles Kennedy", written by another dear, departed friend (Harriet Smith) was sung with passion and genuine affection.  Charles was always 'more singed about than singing'.   He will be sorely missed. 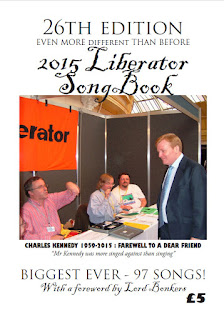 Members of the Glee Club will now find a Facebook group they can join.  There will be more - much more - in 2016 as a certain famous song celebrates a significant birthday!

Those after a copy of the 26th and biggest ever Liberator Songbook should click this link for details.