The secret courts controversy was not the only item on the agenda of last weekend’s Scottish Liberal Democrat conference in Dundee.

Today’s Guardian reports that the conference also called for greater independence for Shetland and Orkney:


Activists at the Scottish Lib Dems’ spring conference in Dundee agreed unanimously that the islands should develop their own relationship with central government – regardless of the outcome of the independence referendum next year.

They also agreed that Shetland and Orkney had a separate right to self-determination.

This decision is a reminder that demands for independence and self-determination are more complex than is generally imagined. People’s identities cannot always be accommodated within neatly drawn national borders. Most people have multiple identities and their local identities are usually more powerful than national ones.

If Scotland wins independence, there will be consequences south of the border. It is usually assumed these will be increased demands for Welsh independence and an English parliament. But in England, is it not more probable that demands for county autonomy will be boosted? Outside Greater London, the English tend to identify most strongly with their county. They are unlikely to feel much enthusiasm for an English parliament (a parliament in London – no change there) or the contrived ‘English regions’. They are more likely to prefer greater autonomy for Cornwall or Yorkshire or any other county with a strong identity that feels hard done by.

In England over the past decade, there has been a noticeable resurgence in county pride, with a revival of local food specialities and folk customs. If this trend continues, it will eventually find political expression.

In my home county of Lincolnshire, latent demands for autonomy could be unleashed by a trend to independence. An independent country? Think about it. Lincolnshire is rich in resources. It has more top-grade agricultural land than any other county in the UK and produces 20% of Britain’s food. The Grimsby-Immingham port complex is Britain’s largest in terms of tonnage (more than 10% of the UK total), which in turn generates about 25% of all Britain’s rail freight. The county is energy-rich, with two of England’s five oil refineries, the UK’s second-largest onshore oil field, a major North Sea gas terminal and a large offshore wind farm. It is militarily important, home to more RAF bases than any other county (Lincolnshire is to the RAF what Aldershot is to the British Army or Portsmouth to the Royal Navy). Yet average income levels are among the lowest in the country. This means that the county’s wealth is leaching out. The more the locals realise this, the greater the effect on their political consciousness.

We should remember that the movement for Scottish independence took off only in the late 1960s and early 1970s with the boom in North Sea oil and a resentment that this windfall would be enjoyed elsewhere. If Scotland wins independence, other parts of the UK may look at their local balance sheets and reach similar conclusions.

This trend is not unique to the UK but can be seen throughout Europe. The European Union will probably be boosted as home to an increasing number of autonomous regions and big cities that no longer identify with their nation states but have a greater need for the solidarity and protection offered by a European federation. (There are already two EU member states with a smaller population than Lincolnshire: Luxembourg and Malta).

Nation states and nationalism have not existed forever but are relatively recent concepts. They are essentially nineteenth-century inventions and the logic behind them is disappearing. Even when the nation state was at its zenith, national borders were not inviolable. In an essay on nationalism and our sense of belonging, Michael Meadowcroft quoted the late Rabbi Hugo Gryn, a holocaust survivor, who told a wry anecdote to demonstrate the absurdity of nationalism:


A man from Berehovo/Beregszász arrives in heaven and they say to him that before you can come in you have to tell us your life story.

“Well”, he says, “I was born in the Austro-Hungarian Empire, educated in Czechoslovakia, started work in Hungary and was for a time in Germany, spent most of my adult life in the Soviet Union and the end of my retirement, just before coming here, in the Ukrainian Republic.”

“My goodness,” they said, “You must have done a lot of travelling in your lifetime.”

So my advice is to familiarise yourself with this flag, the flag of Lincolnshire. It might one day be flying from an embassy in your local county town capital city. 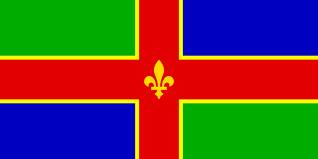 Later... News that the US Department of Justice received a 68-page report last week on the possibility of independence in Catalonia, Scotland and Flanders, and a discussion of how the EU will change to accommodate this trend.