‘Unease’ about Osborne is not good enough 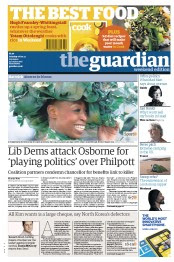 But the story beneath does not justify the hype. What does this “Lib Dem attack” actually consist of? According to the Guardian:


A coalition rift was blown into the open when the Liberal Democrats condemned George Osborne for “playing politics” with the deaths of six children after the chancellor highlighted the Mick Philpott case to raise questions about high welfare payments.

Amid deep unease among senior Lib Dems – up to and including Nick Clegg – over the Conservatives’ use of the deaths of six children to make the case for controversial welfare reforms, the party went out of its way to distance itself from the chancellor’s remarks.

Danny Alexander, the Lib Dem chief secretary to the Treasury, who is usually careful not to criticise the chancellor, made clear his unease. “The Philpott case is an individual tragedy,” he said. “Children have died in that case. I think that is where we should let that case lie. I would not want to connect that to the much wider need to reform our welfare system.”

So this is not an attack, merely “deep unease”. Furthermore, only one Liberal Democrat minister (Danny Alexander) has gone on the record, and his remarks are guarded. The only evidence we have for the “deep unease” of other ministers “up to and including Nick Clegg” is unattributable briefings. This doesn’t much sound like “a coalition rift was blown into the open” or that “the party went out of its way to distance itself from the chancellor’s remarks”. In fact, it doesn’t amount to much at all.

The Guardian’s report includes only one genuine Liberal Democrat attack:


In the most hard hitting remarks by a Lib Dem, the party’s former Treasury spokesman accused the chancellor of playing politics with the deaths. Lord Oakeshott of Seagrove Bay said: “You can forgive George Osborne’s immaturity and inexperience as chancellor but not this calculating, callous cruelty. If he can’t see it is wrong to play politics with the death of six children, he is not fit to be chancellor.”

Oakeshott, who acts as an informal adviser to the business secretary Vince Cable, often does not reflect the thinking of the leadership. But Cable is understood to feel that vilifying people on benefits in the way Osborne has done is misplaced.

Osborne’s statement is morally disgusting and has poisoned discourse on a controversial subject. Yet the best that Liberal Democrat ministers can do is express their “deep unease” or feelings that Osborne’s view is “misplaced”, and only then via their spokespeople’s unattributable briefings.

If Liberal Democrat ministers had openly expressed their revulsion in similar terms to Matthew Oakeshott, the Guardian’s headline would have been justified. As it is, we must conclude that there is no “rift” in the coalition, barely a ripple.